Who do you think is the legend behind the success of all these leading testers?

This is a true story that happened sometime ago. I met Andy Glover (the famous Cartoon Tester today) on my flight to Sweden. We were sitting in adjacent seats. He was drawing cartoons and I was trying to see if I can do one related to testing.  That's when he started a conversation with me asking, "Are you a tester?" and then I instantly replied, "Yes". Back then, no one knew Andy Glover. He was yet another tester out there.
The next thing he said was a bit disappointing though. "If you are a tester why don't you recognize that your cartooning skill is too bad?". I challenged him at 35,000 feet to see if he can do some good cartoons  in testing. He was initially saying, "Nah". I realized he was passionate about testing and cartooning and then had the following conversation when he finally agreed. 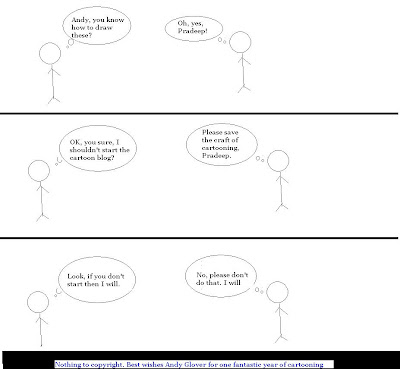 He has done superb ever since. He has rocked the entire industry with his cartoons. Now that the world thinks about him in many great ways, I want to tell the world who has been the reason behind all this success he has got in just one year. Its me, the legend of software testing, yes, the great Pradeep Soundararajan.

OK, you may ask me why I am a legend. I am a legend because I have had my own role, a very important one in success of other testers.

For instance, I met James Bach online in a chat room for testers and was sharing my plan to start a Test Consulting Blog  and then he started Consulting Tester Blog. He is the top blogger today.

I even asked Jerry Weinberg if I should write Perfect Software & Other Illusions about Testing, when we met in Tortonto Workshop on Software Testing 08. He then wrote the book overnight to save the craft of software testing. He released it the next day in CAST 08.

My contributions didn't stop there.Ask Rosie Sherry for instance. She and I were chatting on Gtalk and then I said, "Hey, I am planning to launch a software testing community over Ning" and then she instantly registered the name I planned to and saved you all from the club I could have started.

Adam Goucher - was telling him about my plans to become an expert in Selenium & consult for all companies in Canada. He just instantly turned into a consultant.
Maik Nogens - I recently threatened him :)

Matt Heusser - shared my plans with him to start a new blog called XNDEV and my plans to write for SoftwareTestPro. He thought Software TestPro shouldn't die and volunteered to save them.

Lisa Crispin - During her India trip, I was sharing my notes about Agile Testing with her and said I may write this out as a book. She wanted to save the agile testers and requested me to not write one so that she could.

Elizabeth Hendrickson - Again, she had been to India for consulting. I met her and shared my plans for starting a blog titled Testobsessed and write some real good posts that hit people hard. She was nodding her head in dismay and pulled out her computer and started writing the blog.

Ben Kelly - into learning martial arts and testing. He mastered it over five hours.

Tim Coulter - Told him, I am planning to start corkboard :) It was live within hours. It had so many corks just thanking Tim that he silently thanked me for each cork.

James Lyndsay - Talked to him over skype and shared some test machines with him and discussed my plans to go ahead and make it free for testers. He requested if I could wait for one hour and bang he had half dozens of them.

Santhosh Tuppad - Shared with him my plan to win all Utest bug battles and then he wanted to save the world. He then became a multiple and serial bug battle winner.

A few years back BJ commented on my post and we had an argument. The argument ended in me threatening him that I would write a book of how they test software at Microsoft. Next day I wake up to get a news that Microsoft Press has released the same book written by BJ, Alan & Ken.

Blessings cost $500 per minute. Who else wants to be successful in software testing?
Copyrights held by Pradeep Soundararajan

You are so modest Pradeep,

You forgot to mention how you suggested at 13 I study Electronic Engineering and how you encouraged me to take my first testing role in protocol conformance testing.

You are a true legend.

I would stick to writing though, leave the cartoons to Andy....

Don't appreciate me in public. DOn't you know I am a shy person :)

BTW, you forgot to mention my idea to get testers to write about If I were a test case book.

You want the moral of the story? Its simple, you commented as Anonymous because you are not a legend and want to hide from public. With my blessings you can become a legend like James Bach or Michael Bolton or anyone else whom you want to be like.

Man, fun is fun. Why do you want a moral out of it? This post is not about moral science, its about the truth about the science behind successful testers of today and my role it.

And in the first place I actually thought that you and Andy did meet on a plane by coincidence... It reminded me the tv-series Lost.

Thank Pradeep. You are a true inspiration, a modern day legend.

Well Andy, being an inspiration to the testing community is just my little hobby :)

Nice Touch Pardeep. Humour does not go away, it keeps people entertained and united. If we can't learn from one another who else we turn to. You are a true hero, I would not call it a legend though but you are.

How much for an autograph?

For certified testers, an autograph of mine would cost $900 and for others its free :)

I just wanted to thank you for talking me into using my time machine to go back and discourage myself from inventing a time machine. Now I have been able to focus more of my time where it belongs: testing.

Pradeep, you are too modest for your own good. You probably are too humble to bring it up, but simply seeing your icon (appropriately named, I know) on Twitter caused me to suddenly become concerned with project costing and estimation. I could feel your interest from thousands of miles away, your spirit was so strong. As a side benefit, the distances involved caused me to rethink distance collaboration and how it might work with humans not possessing your strength of presence.

yet another story of small fish blessed by legend to achieve milestone.. Lalitkumar. In our quick meeting at Eurostar, Pradeep told me that he is planing to launch an ezine which would be a tea-time entertainer and before Pradeep, Lalit is almost ready to launch 'Tea-time with Testers'' .... coming soon. !!!

Pradeep,
You missed the time when you inspired the University of North Carolina to organize the Chapel Hill Symposium in 1972.
And wasn't it you who whispered into Edsger Dijkstra's ears that testing shows the presence but not the absence of bugs.
I think you're being far too modest! ;)

I was definitely the guy who realized testing is about showing the presence of bugs and not absence of it during my conversation with someone. I was about to get up and my shirt sleeve accidentally touched someone who today is known as Edsger Dijkstra.

I didn't do anything with the University of North Carolina. I was too busy turning a tester to a legend that time.

Oh, I had completely forgotten that I had helped you. How are you doing these days?

Bring 2 more testers to be blessed and I shall bless you for free :)

My blessings are there with you.

Hi,
You are my inspiration to me to come to the field of testing.

"Pradeep you're a spark in every fire." You're an 'inspiring spark' in every successful tester who has got the fire to become successful.

This is also a true story that happened in 2009, which made me to sustain in testing craft amongst managers who doesn’t even know what a tester's role is? You’re suggestions made me to revisit my thought process to become a better tester today! I started to educate my managers thereby earned appreciation from the same manager as well. I’m greatly thankful for that. It’s time to reveal how you helped me. I would like to share the chat we had in 2009, so other testers can learn from my experience.
---
This conversation was initiated in Gtalk, between Pradeep Soundararajan & Shiva Mathivanan. So I have just replaced "me:" with my name to get readers understand better.

Yes, I have urged the entire test team to start wearing the same clothes, adopt a sligth accent and get the haircut done.

This in the hope that even a small piece of that pure genius-ness may rub off on us.


It is an art to both inspire and entertain so onward to at least 5 more years of blogging.

I also have a style of sitting in the chair that I consider to be important for the real genius to rub off.

Here is how you can try doing it: Sit in the chair and try to adjust to the sweet spot of it and sense the center of gravity before trying to lean over the backrest :)

It is The the Pradeep Soundararajan!

Hey Pradeep... U were the first person to get the idea of Software Testing right? :P

Sorry, I was the first person to get the idea of software. Not just testing software.

Will i receive your blessing if i'm reading your blog. Will it be the same type of blesesing as touching your shirt sleeve?

You got it. Although it was delayed, you did. Be happy and go test software well :)

Somehow we testers need people to admire and people to follow, people to imitate and people to learn from.
And because there was Elvis Presley in Rock'n Roll, there is The Pradeep Soundararajan in software testing.

Thanks for the smile you gave me while reading :)