Is it a best practice that a post should have only one title? ;-) 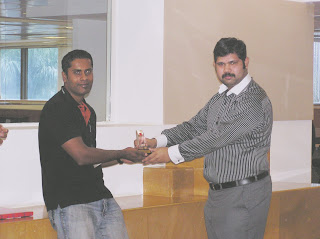 Sharath Byregowda has won the Best Performer award at Mindtree. You know what it means to win the best performer award in an organization that has about 8000+ technical force. According to Mindtree there was a special guest who was invited to give away that award and that special person for them that day was me.

Sharath's manager, Murugan, wanted to make the award ceremony a very special one and surprised Sharath by bringing me in for the award ceremony. A manager so excited about giving away an award of Best Performer of the organization to his subordinate - made me feel wow. While traveling together to Mindtree office, I discovered that Murugan had a good diversity throughout his career and even tried doing business in the United States long ago with his friends. With all that experience, he thought, freedom plays a vital role in testing and hence provided it to Sharath who seeked it. India needs more Murugans. I think they have lot of Sharaths out there.

Freedom with responsibility made Sharath get him the award. This is the second time my student is getting an award at the organization level. Most of you might not know much about Shaham Yusuf but then he won awards for slogging important bugs and an unmatchable record of the highest number of important problems found in Deloitte India.


"Are you Testerlock of Testers & Blocks Consulting?" screamed a voice on the road just when Testerlock was buying some vegetables. Before Testerlock could respond, the young man filled with excitement said, "I have watched you test at a webinar and I loved the way you brought in so many heuristics to your testing approach. I even wrote an e-mail to you a couple of months back".

"Oh, I am Philip. A senior tester at PepLabs and I really wish I could learn more from you. In fact my whole team would love to learn from you"

"We have a problem though. Our manager somehow wouldn't get convinced that we need your training?"

"Really? Do you have some time, let me pay for these vegetables and we can sit around for a coffee"


A few minutes later, Testerlock and Philip were at a Cup-O, a coffee bar in Portland, Oregon, discussing about the problem that Philip raised.

After the first sip of a coffee, "So, you think your manager is a barrier to bring me in, to coach your team?"