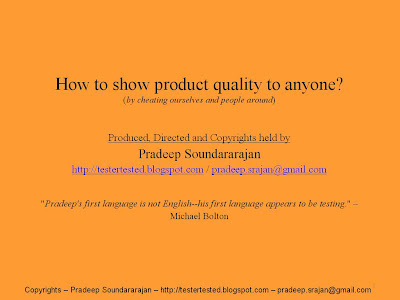 I have no control over your thought process to restrict you to not read the title as Ego You Go and I go of testers.

Here is what I think about my ego:

Which of the above two statements could be true in your case, too?

The passion to become good at the craft we are living in makes us better person, too, and the evidence is from my incomplete research on ego and testers.

In my experience, so far, I have had an opportunity to work with testers from various backgrounds (education, culture, native place, language, the way they were brought up ...) , experience ( in terms of number of years , non testing field experience ), skills ( whatever they think their skills are, whatever I think their skills are), knowledge (domain, craft specific ), interests ( curious to explore testing or curious to explore something else), passion (testing or money or both [ certification - if you like it] ) ... and infer that one of the most common thing amidst this diversity is ego.

People (who think they don't have ego) think those who have ego are the ones who are bad professionals. I ( who is sure that I have ego ) think it is not that bad for people to be egoistic as long as they achieve the mission they have in hand without spoiling opportunities to succeed in future missions with the same team.

I think I have not anything different and I am happy to have identified it.

I am going to discuss 3 cases ( the most common and uncommon ones, in my opinion ) that can help me ( or not help you) to understand what I inferred from what I witnessed, experienced, heard and saw.

Case 1: From Lead to Seed

A senior tester (by designation) got promoted to a Test Lead and thought he'd be no longer expected to execute tests. He is moved to a new product based on a requirement of a Test Lead and finds himself in tough situations where people who report to him aren't respecting his views. What he fails to identify is the need to build credibility by executing tests and understanding the product.

The ego of being a test lead and yet not respected by people who report to him ends up in clashes about ideas to proceed with testing. The manager identifies that it would be a good idea for him to learn the product, execute tests for a while, understand the testing complexity and challenges and then play a role of a Test Lead ( as per what he thinks ) ends up in he taking up test execution. During the process of test execution, the ego is still alive and he is hesitant to ask questions that he thinks his team members would laugh at and finally ends up in not knowing the product well and failing to execute tests in a manner that someone thought it as a right way.

On the other side, the team members who report to him do have an ego that built up during the process of knowing that their team lead knows little about what they are doing.

I guess that leads to bad testing!

A company enjoyed having 2 senior testers (senior by designation and lets call them Shyam and Jagan) who were passionate about testing and their work competed against each other's work output and was a healthy competition, of course. Shyam and Jagan worked on the same product but for different customers. Both of them were known to be good at meeting the mission in hand and the important point to note is: both were thick good friends for over 3 years.

Unfortunately, one fine day Shyam's work is applauded by the management. This act of appreciation hit Jagan hard enough to start building up an ego with Shyam. Poor Shyam, not being aware of this ego that Jagan is building cracks jokes ( as both used to ) on Jagan's work and this hits him more hard.

Shyam who cared for his friend Jagan was left disappointed when he did come to know about the multi storied ego that was building. Shyam eventually found it tough to continue working as he too started building his own version of ego. The ego got translated into an unhealthy competition that ended Jagan to look out for a job where he feels safe to work without such unhealthy competition. Shyam and Jagan still thought alike as they used to and both ended up looking for a job without each other's knowledge.

Both quit the company and moved to different ones more or less at the same time without realizing. Here comes the crux of the story: Shyam and Jagan never felt happy with their work thereafter despite working away from each other because what motivated them to succeed in the past was the healthy competition.

I guess that lead to bad testing - for Shyam, Jagan and to the company they earlier worked together.


All it takes is one second...

It takes just one second to feel egoistic and not do something that you too are aware should be done but that one second might result in making you and others around you as bad testers.

It takes one second for those who stole my posts to admit they stole but makes them feel better forever that I appreciated them.

It takes one second to feel egoistic ....
Case 3: From Manager to Damager

Wait a second, let me write the Case 3 a little later because, I got a mail from a team member who thinks he is too smart because he was appreciated for finding a lot of bugs and is a better tester than me. He is challenging my decision. How can he do that when he is reporting to me? I am going to fire him right away and shall update this post later.